New channels and platforms to broadcast WorldSBK around the globe 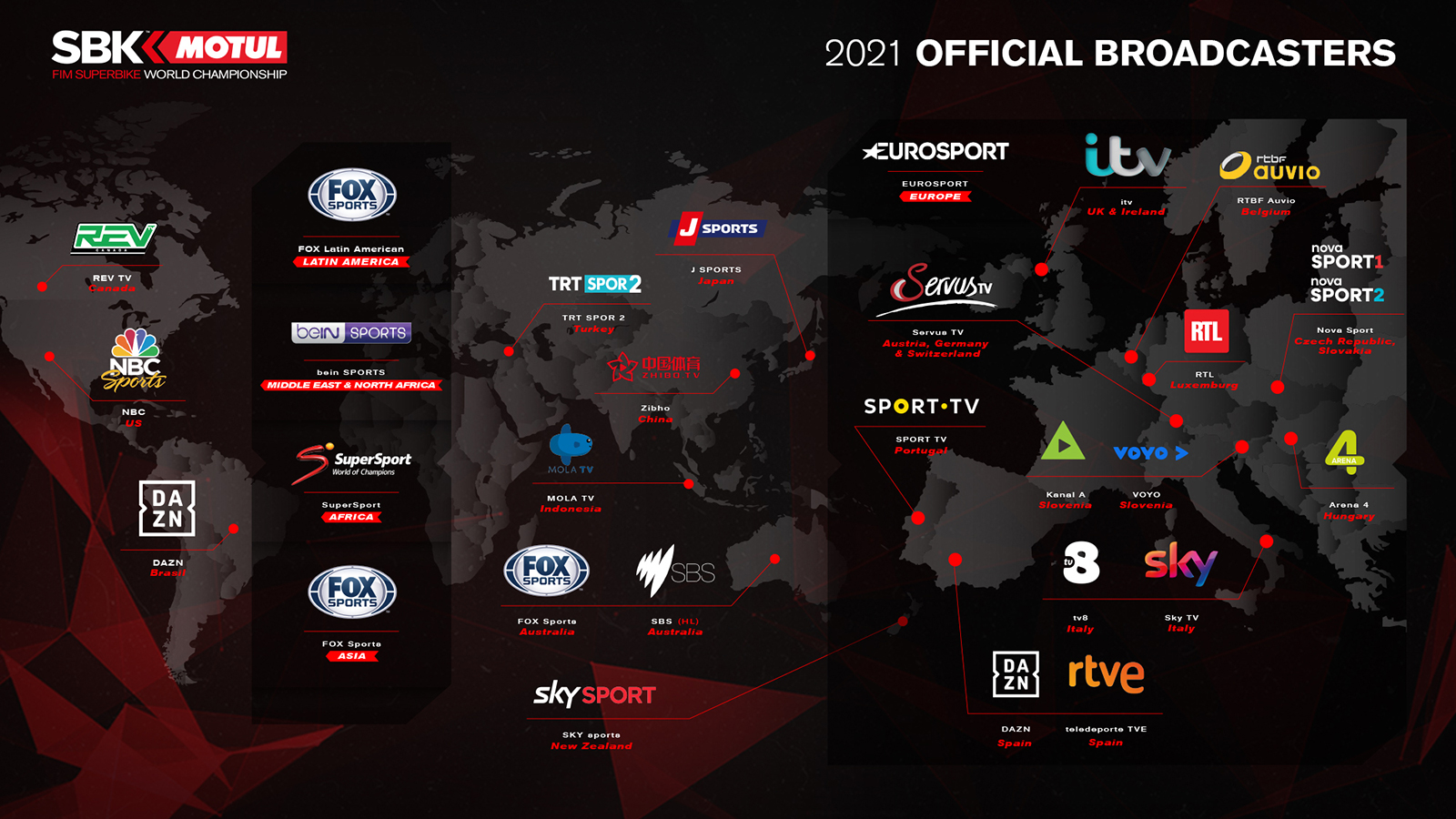 Dorna WSBK Organization has announced that the TV coverage for the MOTUL FIM Superbike World Championship will reach new audiences and new territories for the 2021 season. New broadcasters have agreed to show the fastest production bike Championship in the world while crucial partnerships have also been extended.

Eurosport remains one of the key broadcasters as it shows WorldSBK around Europe with a new five-year agreement reached, ensuring fans from 54 countries in the continent are able to watch the exciting Championship battle unfold. Eurosport UK will also cover every Round with their own personalised content for viewers in the UK and Ireland, while the ITV network will broadcast a 46-minute highlights package after each Round.

Sky Sport in Italy will broadcast live coverage of all three classes throughout the 2021 season, providing in-depth coverage, highlights and news from across the season, including Federico Caricasulo’s (GMT94 Yamaha) title charge as he returns to WorldSSP. Free-to-air channel TV8 will also broadcast all three WorldSBK races; ensuring Italian fans can watch Michael Ruben Rinaldi (Aruba.It Racing – Ducati) in his first season at the factory Ducati outfit.

In Spain, fans will be able to watch Alvaro Bautista (Team HRC) and Ana Carrasco (Kawasaki Provec WorldSSP300) through the national Spanish television network, RTVE, and their dedicated sports channel Teledeporte, as well as DAZN in Spain, while DAZN will also broadcast the action in Brazil with Ton Kawakami and brother Meikon (both AD78 Team Brasil by MS Racing) going for WorldSSP300 glory. Portuguese fans do not miss out either with broadcasts on Sport TV, while viewers in Gibraltar can watch on GIB Telecom.

German fans will be able to see Jonas Folger (Bonovo MGM Action) on German machinery as BMW bring a new bike to WorldSBK on ServusTV and their new online platform, servustv.com/sport, which will broadcast WorldSBK, WorldSSP and WorldSSP300 in Germany, Austria and Switzerland.

New for 2021 and coinciding with the return of the Czech Round, Nova Sport and VOYO will broadcast all three classes in the Czech Republic and Slovakia for the next five seasons, while Kanal A will also be available in Slovenia for the same duration. In Hungary, Arena4 will be the new broadcaster, adding WorldSBK to their portfolio of sports programming. There are a further two new broadcasters providing coverage in Europe for the 2021 campaign with RTL showing the action in Luxembourg and RTBF Auvio broadcasting the action in Belgium, coinciding with the arrival of Loris Cresson (TPR Team Pedercini Racing) in WorldSBK.

Indonesia returns to the WorldSBK calendar in 2021 at the Mandalika International Street Circuit and fans in the country can watch all the action including Galang Hendra Pratama (Ten Kate Racing Yamaha) in WorldSSP on Mola TV, while fans across Asia will be able to watch Honda’s second season after their return on Fox Sports Asia. J-Sport will also broadcast the action in Japan. Fans in China will also be able to enjoy WorldSBK coverage through Zhibo.tv, an online streaming platform that will show all three WorldSBK races both live and on-demand throughout a Round with Mandarin commentary; marking the first time a Chinese broadcaster has aired WorldSBK.

Fans in the Middle East and North Africa (MENA) can enjoy 2021 on Bein Sports with Supersport broadcasting all the action across the African continent. There is a new broadcaster in Turkey with TRT Spor; with fans able to watch Toprak Razgatlioglu (Pata Yamaha with BRIXX WorldSBK), Can Öncü (Kawasaki Puccetti Racing) and Bahattin Sofuoglu (Biblion Motoxracing Yamaha) in WorldSBK, WorldSSP and WorldSSP300 respectively. In Oceania, Fox Sports will broadcast the action in Australia with highlights shown on SBS while Sky Sport will show the 2021 campaign in New Zealand.

North America is not without coverage too, with WorldSBK remaining on the NBC Sports Network for 2021. A new deal in Canada for 2021 means REV TV will broadcast WorldSBK races as well as the 46-minute highlights package produced after each Round, with REV TV using their own commentators for a bespoke experience for Canadian fans. In Latin America, Fox Sports will broadcast the action so fans can enjoy all the excitement from across the season.

Fans from all across the globe will be able to watch every single moment of action in 2021 using the WorldSBK VideoPass, giving viewers live coverage of every session of every class as well as a huge archive of historical action. Thanks to Tissot, Live Timing is available on the WorldSBK App which can be downloaded for free.