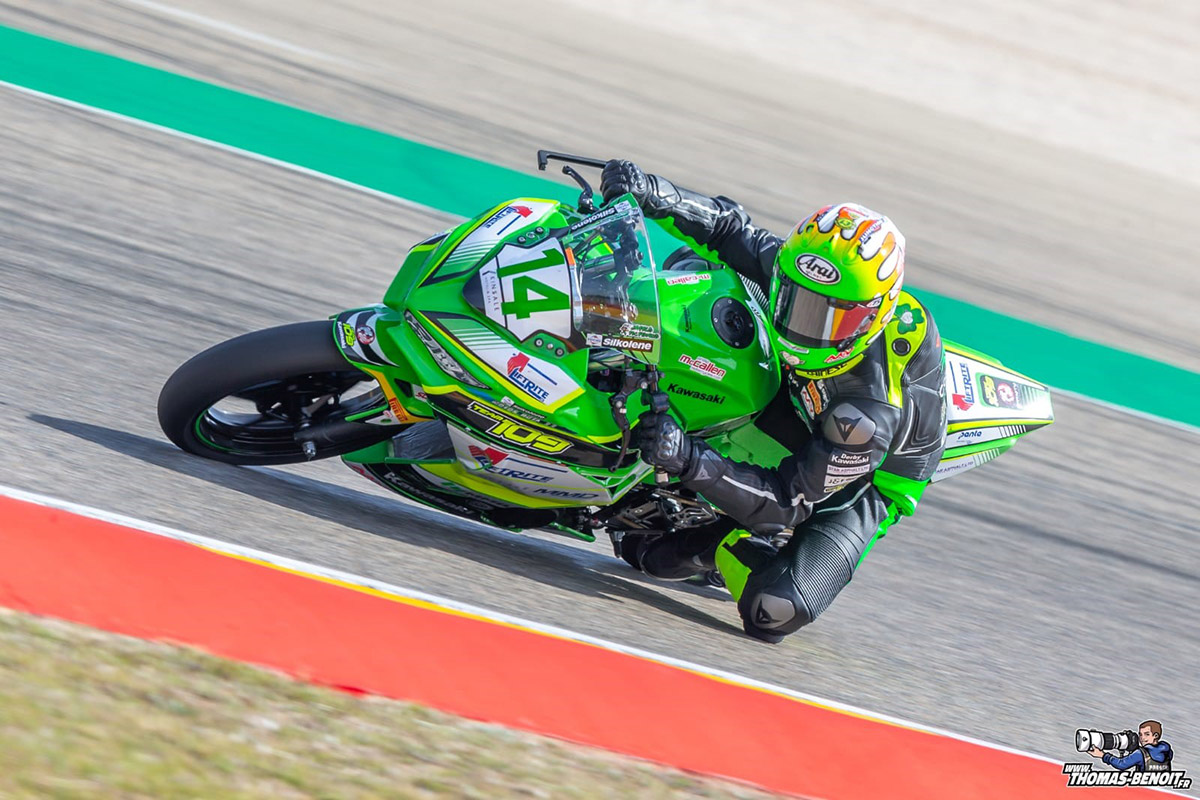 Team 109’s James McManus has successfully completed his first weekend in the FIM Supersport 300 World Championship as a full-time rider, finishing both of the opening two races of the season.

A small crash on the opening day didn’t slow the teen who, after listening and working with the team, was able to significantly improve his lap times, thus closing the gap to the front, by the time the final chequered flag was waved.

The step made from Race 1 on Saturday to Sunday’s Race 2 was clear for all to see, both in terms of overall pace but also in how much more settled James appeared on track. The #14 enjoyed a twelve lap multi-rider fight, enabling the youngster to gain valuable experience for the season ahead.

The results are confidence for James who will be visiting the majority of the circuits on the 2021 calendar for the first time this year.

James McManus:
“Superpole for us didn’t go too bad. I managed to secure my personal best lap of the weekend. We had a few problems with the bike which we were able to fix for race 1. Being 39th on the grid int where we want to be, it’s just a bench marker really as it’s my first year in the class. All we are looking for it to keep improving in every race. In race 1, we made a small mistake on the first lap, I got a good enough start but unfortunately made a mistake around turn 5 which took me wide, so we had to recover from that. We just need to keep chipping away and aim for a better day tomorrow. Race 2 was a good enough race for us, we started in P36 and came across the line in P30. We managed to get a good start and engage in a battle with four other riders. I learnt a lot in and made good progression, so I’m happy enough with the result.”

Paul Tobin – Team Manager:
“Today was James’ first race in the 2021 Championship, the weekend, like many more to come, has been an opportunity for him to learn and progress. He started in P38, improved on his lap times every lap, and finished in P36. We have a few things to change on the bike for tomorrow. He’s happy enough to learn and the team are happy with his performance today. We have a couple of things to try for tomorrow, so from here, it’s onwards and upwards. For the first weekend of the season, we wanted to put a dart on the board, so to speak. It’s been James’ first full race weekend, so it’s obviously been a big experience for him. It’s also been his first-time racing at Aragon too. For warm up, we were experimenting with another setting for him to try in the dry, but unfortunately it ended up raining. We managed to get a good wet setting for him, and he was noticeably confident. Fortunately, it dried up and he made a good start. As the race went on, he improved his position to P30. His lap time came down again so we’re incredibly happy with his progression. We know that it’s going to be very much a learning year for James, and we’re prepared to put in the work. We’ve made a good start and are looking forward to racing at Misano in a few weeks.”