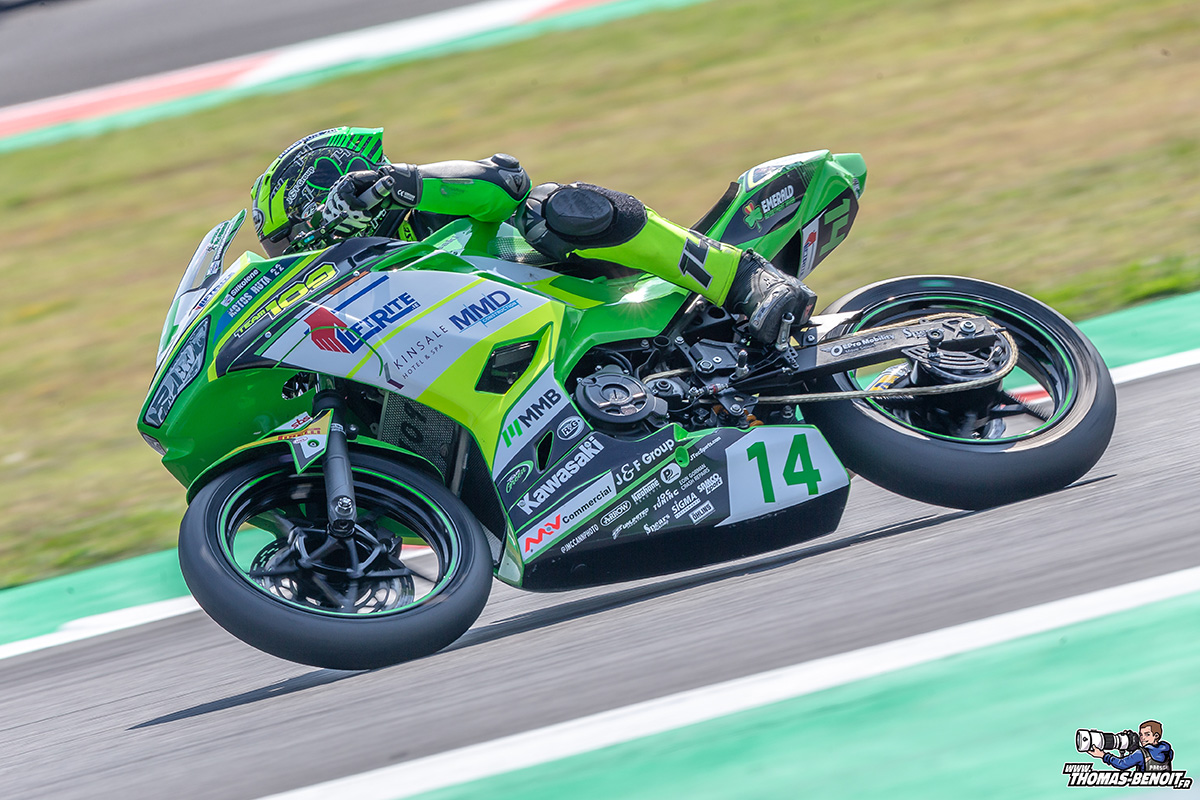 Misano World Circuit Marco Simoncelli was the venue of the latest round of the FIM Supersport 300 World Championship, where Team 109’s James McManus put on a great show in front of the limited number of spectators allowed into the venue following a more than twelve month ban on spectators following the Coronavirus pandemic.

Another new venue for the teen saw another day of learning on Friday with the #14 rider improving by over a second in Free Practice 2, despite a rise in temperature in more than seven degrees.

When the lights went out on Saturday, James battled hard, involving himself in a multi-rider fight for the entire fifteen lap encounter. Sunday saw him unfortunately taken out on the lap one, but a determined McManus remounted and finished the race, gaining more valuable experience.

31st and 25th in the latest round of the FIM Supersport 300 World Championship for James McManus and Team 109 gives the squad a huge amount of confidence ahead of their next WorldSSP300 event at the TT Circuit Assen in the Netherlands in a few weeks.

James McManus:
“Saturday’s race wasn’t too bad. It was another finish under my belt, and I am building more confidence every time I go out. I didn’t know the track, but I continue to learn and am going faster every session. I had a bit of on off in Warm-Up on Sunday morning. I made a good start in Race 2 but unfortunately went down with several other riders. I restarted and was able to finish the race. I don’t know the circuits so it’s hard to be on the pace immediately, but we knew it would be like this. Anyway, onwards, and upwards to Assen. Thanks to the team, they are doing a great job.”

Paul Tobin – Team Owner:
“James did a good job in FP1 and FP1 which gave him a good base for Superpole. He impressed us with how quickly he is learning how to attack and ride in the qualifying on the World level. He was able to put his two fastest laps in right at the end of the session. We made some changes for Race 1 and with the temperature change they probably didn’t work as we expected. Nevertheless, he dug in and had a solid ride after a race long fight with several other riders. He had an unlucky Sunday. He was taken out in Warm-Up and then in the race he got caught up in the multi-rider crash on lap one, again not his fault. He remounted, came back to the pits and we were able to fix the handlebar and he went back out, but it was then literally a test session. It was his first time in Misano, and he kept improving throughout. Overall, we happy with how he is working and with the progress that he is making.