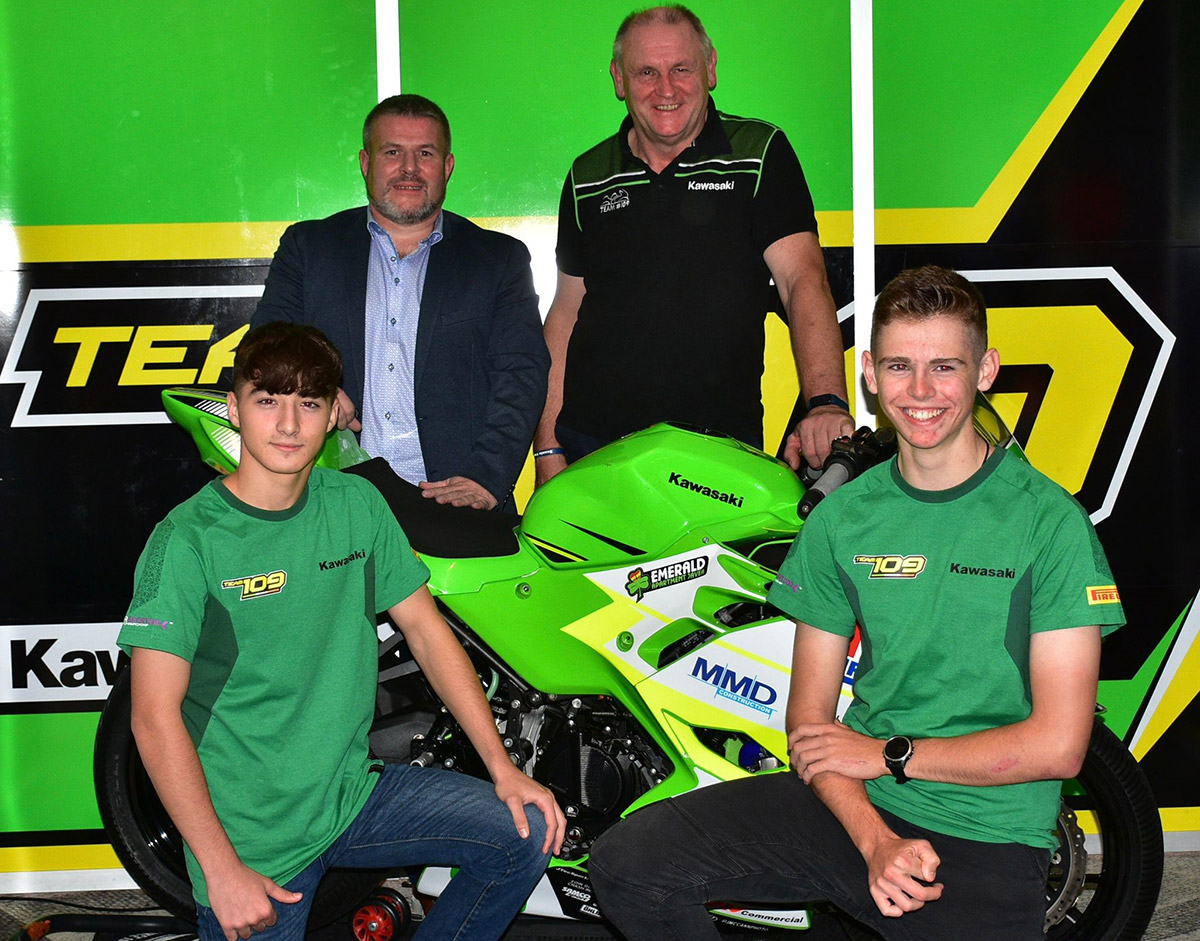 After a successful 2021 season that saw them achieve their first top six, along with multiple points scoring finishes in the FIM Supersport 300 World Championship: Team 109 is delighted to announce an expanded two rider effort for 2022.

Having won a British Championship in 2018, the team, which began in 2015, and was founded to enable young talent to develop, moved into WorldSSP300 in 2020. They led their first race on the world stage and scored their first World Championship points, this year, narrowly missing out on the podium. The expansion to two riders is the next step for Team 109.

Daniel Mogeda:
“When I started racing when I was five years old, I went to bed every night dreaming about racing in a world championship. Dreams don’t always come true but for me they have. I am part of Team 109, a high-level professional team which has everything in place needed to win the championship. Of course, I still have a lot to learn but I am with the best team to help me reach my goal. I am really looking forward to starting the new season. I will give my best in every race!”

Harry Khouri:
“I can’t wait to start the 2022 season with Team 109. This year was a huge learning curve, but I’m look forward to using my experience from this year to get the best possible results. My goal for next year is to consistently be up the front and to be in the position to fight for podiums and wins. I really think that this team can help me achieve this and I can’t wait to get started.”

In addition to contesting the FIM Supersport 300 World Championship, Team 109 is also proud to announce its involvement with the Irish Talent Team, a new initiative that will see them support youngsters within the FIM Mini GP series. The news, along with the 2022 rider line up was announced at a special event at the Kinsale Hotel and Spa in Cork, Ireland, on Saturday night. The event looked back on the team’s journey in 2021, looked ahead to 2022 and featured prominent Irish World Superbike racer Eugene Laverty who was on hand to offer his thoughts ahead of Team 109’s new adventure.

Paul Tobin – Team Principal:
“Firstly, what a great event at the Kinsale Hotel and Spa on Saturday. Thanks to everyone who came. I would like to thank all our sponsors for sticking with us and enabling us to expand to a two-rider team next season. We are really excited about the growth of Team 109 within the World Superbike paddock. Daniel rode with us in the last four races of 2021 and did a fantastic job. He is only sixteen, has fantastic potential and we are excited to work with him for a full season. Harry has been on our radar and is a rider who has also demonstrated his speed and potential in his first season of WorldSSP300. I think the Team 109 environment will really help him and we saw at our event on Saturday night that he is very much a team player and like Daniel will represent us in a professional way both on and off track. Coming from Australia to Europe to race motorcycles is not easy but he has done an excellent job. It’s a great prospect for us to have both bikes running at the front next year! Regarding the FIM Mini GP Series, this is something that provides a great structure for young riders and is something that we are proud to put our name to. We are hoping that through the Irish Talent Team we can sow the seeds to ensure an Irish rider has the ladder to move into the World Championship with us in the future. It would be fantastic if we could find the next Jonathan Rea, Eugene Laverty, or Jack Kennedy in the coming years. We will run two bikes in the FIM Mini GP series under the banner Irish Talent Team powered by 109. Alan O’Connor will manage it along with some of our experienced crew. We would also like to further extend our thanks to our loyal sponsors for getting behind us with this new initiative. In association with the promoter MCI, will provide support to all riders competing not only those within our team!”