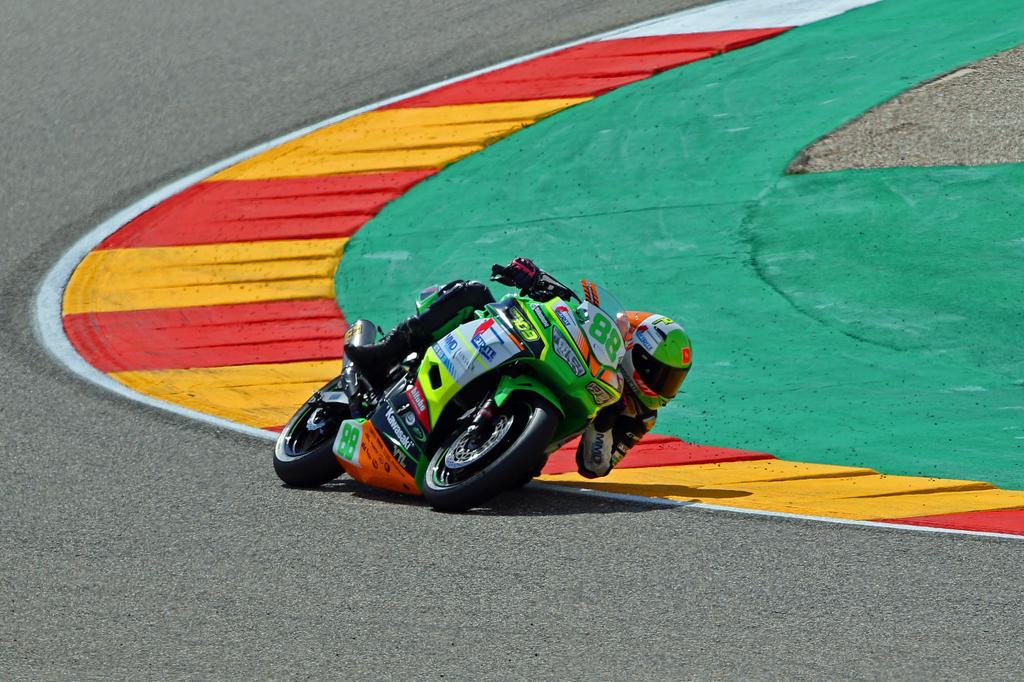 Team 109 leave MotorLand Aragon empty handed in terms of world championship points but full of optimism for the season ahead after the opening two races of the 2022 FIM Supersport 300 World Championship saw their riders Daniel Mogeda and Harry Khouri narrowly miss out on top fifteen finishes yesterday.

Fast throughout the two-day test that preceded Round 1 of WorldSSP300, the Spanish / Aussie duo were unlucky in Saturday’s first twelve lap encounter – Khouri crashing out without injury early on and Mogeda crossing the line in twenty first.

Yesterday’s second race saw a much stronger result from both riders, the pair locked together from lights out to the chequered flag with Mogeda just edging Khouri as they crossed the line. They finished seventeenth and eighteenth respectively.

Team 109 moves on to the next round of the championship at the Cathedral of Speed – the iconic TT Circuit Assen in two weeks.

Daniel Mogeda:
“Race 1 was tough. In qualifying I made a good time riding on my own, so I was confident but then we had a small problem, and I was unable to return to the track. In Race 1 I started from twenty-ninth and was able to finish P21. It was a bad day for me, and I didn’t get the results I wanted but I want to say thanks to the team for continuing to push for me. We made some changes for the morning Warm-Up to improve my feeling, but we went in the wrong direction. In Race 2 I had issues with the front of the bike which we couldn’t solve despite everyone working really hard. We now know the issue and for Assen we can fix it. The team did a great job, and, in the end, I finished P17.”

Harry Khouri:
“It was a really difficult weekend, and not the results that I expected from myself. That said it’s weekends like this that will make us stronger as a team. Over this past week we have learned a lot from each other, and it can only be better in Assen. I am happy with the way that the team works, they have given me a great bike and I can’t wait to get back out there at Assen!”

Paul Tobin – Team Manager:
“It was our first weekend since we expanded the team, bringing in a second rider and new crew. Harry did a great job, made the bike his own and really became part of the team very quickly. He progressed throughout the weekend, and we were very happy with him. Daniel continues with us this year but unfortunately had an arm pump issue caused by his new kit which wasn’t ideal. He also had a technical issue which hampered him. Nevertheless, he also rode well, and we are happy to see him give it his all even when things were against him. It’s only round one and we are already looking ahead to Assen where I am sure we will be challenging nearer the front.”